In March, 1988, Washington State Governor Booth Gardner signed into law the AIDS Omnibus Act. Because of its sweeping scope, public health orientation, substantial civil rights protection, and statewide approach to providing AIDS care services, the Act was considered the most comprehensive and progressive statewide approach to AIDS policy in the United States at the time. It served as a model for legislation in other states.

The AIDS Omnibus Act required AIDS education in public schools for grades 5 through 12. The Seattle-King County Department of Public Health, which had supported outreach programs to schools since the mid-1980s, now undertook new initiatives.

In 1995, student focus groups at West Seattle High School provided feedback on this pamphlet, “You Are Not Alone.” As a result, Public Health decided to make several changes, including removing the image of the hairy palm in the upper left, because the focus group did not understand the reference.
Series 1825 – History files, Seattle-King County Department of Public Health: Prevention Division / HIV-AIDS Program. [1825-6-18]

Series 1861 – Subject files, Seattle-King County Department of Public Health: Prevention Division / HIV-AIDS Program. [1861-4-20]
The AIDS Omnibus Act required school curricula to focus on “the dangers of sexual intercourse, with or without condoms” and to promote abstinence, while also providing accurate information on AIDS prevention. When Washington State’s Advisory Council on HIV/AIDS recommended that condom use be included in AIDS education, the Department found itself in the middle of a public debate. Educational programs and materials provided detailed information to promote accurate understanding of condom use and STD prevention. Many saw these campaigns as encouraging teen sex. Some objected to teaching condom use in schools with the argument that condoms were ineffective in preventing HIV infection. The Department challenged this view with a report distributed throughout the Seattle School District in 1992. 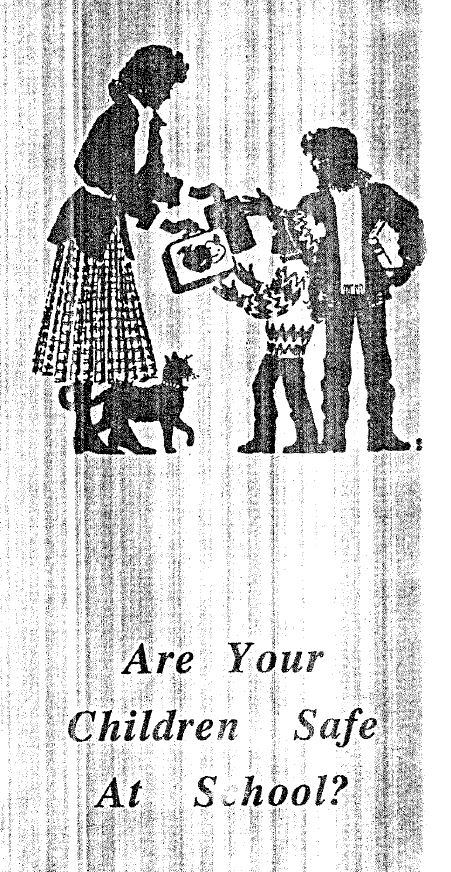 “Concerned Grandparents, Parents, and Teens” of Kirkland, Washington, produced this brochure objecting to the education program prior to public meetings that were required under the Act. Parents had the choice to opt out of AIDS education for their children.

Cover of a brochure produced with input from the West Seattle High School student focus group in 1995.

Cover of brochure (art by Keith Haring) that was independently distributed, along with condoms, at Seattle area schools in 1992 by the local youth caucus of ACT UP.

Discrimination due to the stigma of being HIV-positive was so potentially damaging that lawmakers saw the need to change long-standing public health policies. With other diseases, there had been less concern for protecting patient privacy. Practices such as reporting names to local and state health offices, forced testing, and notifying partners of an infected individual were standard. From the beginning of its response to AIDS, the Seattle-King County Department of Public Health had held firm that protecting patients’ privacy was critical to an effective program. They argued that if people trusted the Department and its community partners, they would be more likely to get tested and engage in prevention efforts. The AIDS Omnibus Act created standard, statewide rules in an effort to balance civil rights and patient privacy with public health and safety. In practice, implementation could still prove challenging. 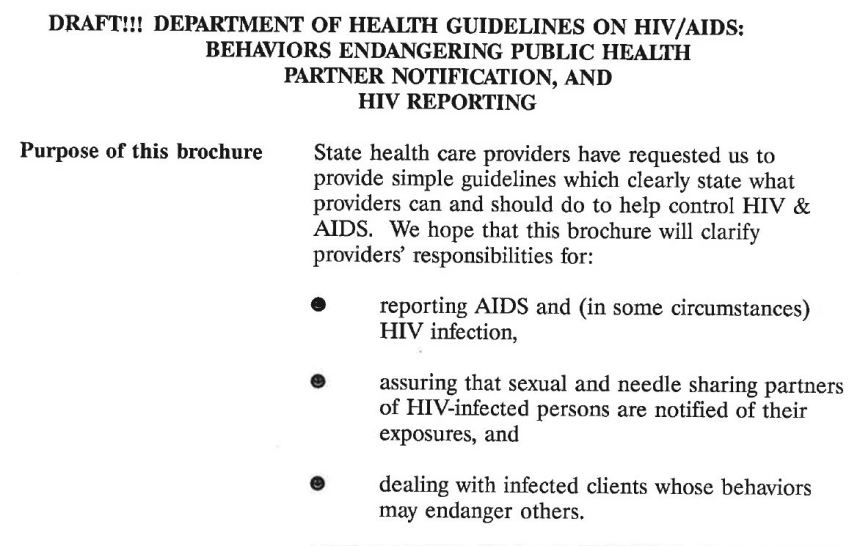 In 1991, the AIDS Prevention Project developed this brochure to help health care providers understand the how and when to report HIV and AIDS cases to public health officials.

New protections under the Act

In 1987, the King County Prosecuting Attorney’s Office charged Seattle resident Steven Farmer with felony exploitation of a minor for taking inappropriate photographs of teenage male prostitutes. (The subjects were 16 and 17—the age of sexual consent in Washington State. The state’s exploitation law, however, protects individuals under 18.) The photos had been seized in what was found to be an illegal search, causing the charges to be reduced to a misdemeanor in a plea bargain.
After receiving a tip and corroboration from Farmer’s acquaintances that Farmer had told them he was HIV-positive, prosecutors sought to increase his sentence, accusing him of deliberate endangerment. Farmer denied he was HIV-positive. Amidst an increasing public outcry, the court ordered that Farmer be tested for the virus without his consent. The results (positive) were presented in open court by the head of the Public Health Department’s STD Program, Dr. Hunter Handsfield, who appeared at the request of the presiding judge. The test in question was not performed by Seattle-King County Public Health nor by the AIDS Prevention Project. But the court-ordered disclosure of Farmer’s HIV status by a Public Health official caused people to question whether the Department was protecting patient confidentiality. APP staff worked to rebuild trust and reassure critics that case records were indeed maintained in confidence. 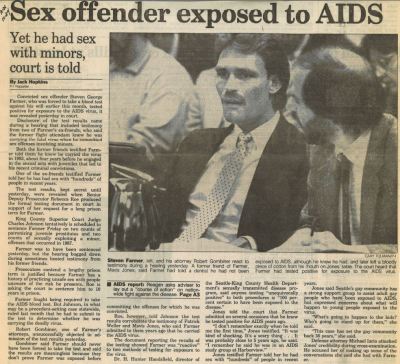 Seattle P-I article on the Steven Farmer case, which was highly publicized in local media.

Series 1342 – Issue Files, History files, Seattle-King County Department of Public Health: Prevention Division / HIV-AIDS Program. [1342-1, 1342-6]
The State Supreme Court later found that the judge had acted outside his authority. In 1994, when he was dying of AIDS in jail, Farmer was granted clemency by Governor Mike Lowry. The case highlighted legal and civil rights questions around forced testing, rules for which were set out in the AIDS Omnibus ACT. The prosecution was seen by some as deliberately targeting Farmer amidst a wave of anti-gay/AIDS hysteria, with media coverage stoking the public’s fear. Prosecutors held that the case was about protecting vulnerable minors from sexual exploitation and endangerment. 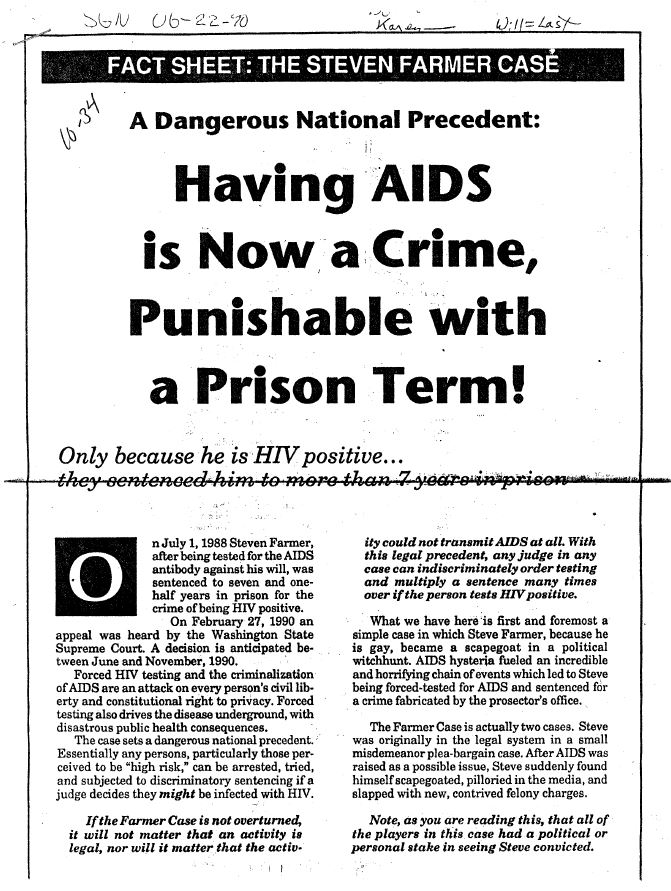 “There was a real mix of reactions back at that time, obviously illustrated by the fact that the judge had to be escorted out of the courthouse.

….there was a real public health concern and there was a real concern for these kids. They’re vulnerable, they live on the street, they don’t have any support system. You know, when we look at human trafficking issues today – when I look back at that time, at those boys, they didn’t really have anything or anybody. So part of the concern was making sure they’re protected in all respects, not just from HIV but from sexual assault or any kind of exploitation. We didn’t have the kind of mindset back then…the sensitivity that we have today. I think our office had that, but I don’t know if it was as widespread as it is today, where we embrace our vulnerable and try to make sure that they’re protected. ….it was an important moment in history and it was one where you had concerns about public safety…where a judge found there should be a test compelled. Of course our system works when it goes all the way to the Supreme Court and they can say yea or nay, and they said that was exceeding authority. The thing is, our laws are always changed through the courts…. Our courts really have to handle some of these social, impactful issues. I think we had the first Special Assault Unit in the country in Seattle, and we had a long-term prosecutor that was extremely fair and principled, so if a case is to be tested anywhere on that issue, I think King County would be one of the best places, if not the best…to deal with the issue.” Anne Bremner, Prosecutor in the Special Assault Unit of the King County Prosecuting Attorney’s Office 1983-1988. Bremner prosecuted the initial case against Farmer. (Anne Bremner. Oral history interview, October 2015.)

Hunter Handsfield argues that a heavy-handed approach to HIV testing would have worked against the goal of containing the epidemic. (Oral history, September 2015.)

Draft of article, “The Partner Notification Field Visit: The Real True Story,” by Frank Chaffee, describing what partner notification was really like. The article was published in the APP’s staff newsletter, The House Organ in 1991.

Order requiring Medical Examination and Counseling, used in cases where an individual appeared to placing others at risk of contracting HIV.

Frank Chaffee describes enforcing the AIDS Omnibus Act in cases where a person is knowingly putting others at risk of contracting HIV. (Oral history interview, January 2016.)

The State of Washington provided funding for programs required by the AIDS Omnibus ACT. In 1990, the federal Ryan White Comprehensive AIDS Resources Emergency (CARE) Act also allocated money to be used for local AIDS programs. The Ryan White Act required establishment of local councils to coordinate distribution of funds. The first HIV/AIDS Planning Council in King and Snohomish counties was appointed by King County Executive Tim Hill in August 1992 with a membership composed of both Public Health Department representatives and community partners. This was the first time local AIDS funding decisions were consolidated under one regional entity. The Planning Council had to overcome initial opposition from gay and AIDS activists who feared conflicts of interest among Council members, and who questioned the early models used to prioritize and allocate funds. The Council still works today to distribute AIDS funding equitably to organizations in King, Snohomish, and Island counties. By law, one third of the Council members must be agency-unaffiliated people living with HIV who are consumers of care services. The Council is now known as the Seattle Transitional Grant Area HIV Council. Read more about its work here (external link ).
Who was Ryan White? Click here (external link) to find out.

Patricia McInturff led the Department’s response to AIDS as Section Administrator and then Regional Division Director for the Seattle-King County Department of Public Health from 1982 to 1994. She influenced state and national health policy, such as through her service as co-chair of the Ryan White Title I Council and as a member of the National Advisory Committee on HIV/AIDS for the CDC. In 1992, McInturff was awarded the first Washington State Governor’s AIDS Service Award for Public Service for her work as Regional Division Director. In 1994, she was awarded the Municipal League of King County’s Public Employee of the Year.

Next: Safer Sex: The New Normal?